The next super material: Shells from algae 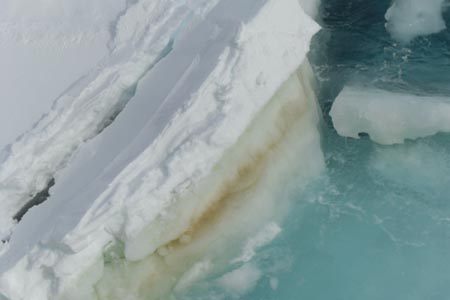 Swedish Algae Factory’s new product had its origins in a journey the company founder made to the Antarctic.

The microalgal group diatoms account for 20% of global carbon fixation and produce the oxygen of every fifth breath we take. During millions of years, diatoms have evolved and survived in harsh conditions. On an expedition to the Antarctic, our co-founder, Angela Wulff, who is a professor in marine ecology, studied diatoms living inside and under the ice. A fascinating discovery that led her to believe that it would be possible to cultivate algae industrially back home in Sweden, under controlled forms. Once she had returned, she met Sofie Allert, a biotechnologist, who had developed a fascination for algae and the use of algae as a sustainable raw material in industrial applications during her bachelor thesis. Together they set out to prove that it is possible to create a sustainable and even climate positive industry with the help of algae.

Climate change effects, like global warming caused by carbon dioxide emissions, and our way of releasing chemicals that contaminate

in-cosmetics back in person in April

Summit to distribute for Nxtlevvel

We Ichimaru Pharcos a global company that contributes to the “health and beauty” of people all over the world by providing high-quality products through research/development and technology innovation in Japan.
After the establishment in 1959, ICHIMARU PHARCOS has become a global leader in Research and Development of natural active...

CLR develops innovative and high-quality cosmetic actives for skin and hair care and has enriched beauty and personal care with many novel actives and pioneering concepts over the past 60 years.
Specializing in the development of biologically active products, we use state-of-the art methods and technology to ensure high-quality performance and...