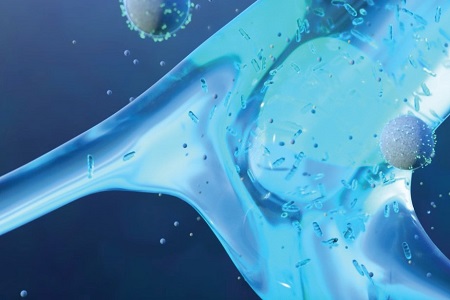 Mitochondria generate the energy our cells and our body need to function effectively, so dysfunctional mitochondria potentially influence the ageing processes.

Such dysfunctions are inherent to the energy generation process which produces free radicals and eventually damage the walls of our mitochondria. As a result, beside free radicals, our mitochondria synthesize the antioxidant CoQ10 which should exist in balance. As we age, mitochondria accumulate damage and naturally slow down reducing their activity and, in the same way, CoQ10 synthesis.

In cosmetics, CoQ10 have been widely available for many years, however, the evidence has shown that supplementing with standard CoQ10 is not as effective as hoped. Only a very small amount of CoQ10 actually makes it inside our mitochondria due to its poor absorption that includes the active form of CoQ10 ubiquinol, which is quickly oxidised and inactivated, or simply because Q10 exerts its antioxidant activity long before reaching the mitochondria.

Trojan Q10 changes the game of anti-ageing, offering a 360º activity. Based on the cutting-edge Trojan Technology, recently developed at Infinitec, Trojan Q10 is able to surgically and effectively deliver CoQ10 to fibroblast mitochondria.

In fact, Trojan Technology displays a dual-mode, extremely precise targeting ability: it first targets fibroblasts, and when internalised into their cytosols, it targets mitochondria. Q10 is released into the mitochondria and corrects the multiple signs of ageing: it combats the decline in cell energy, by restoring optimal mitochondrial activity, neutralises ROS as well as collagen synthesis.

The skin looks rejuvenated, with increased elasticity and firmness.

Making a difference for essential workers

NAGASE Personal Care, a division of NAGASE & CO., LTD., is an established supplier of beauty and personal care ingredients from Japan together with our overseas offices. We provide a wide range of specialty, basic and naturally derived ingredients to researchers, formulators, and marketers in the Personal Care industry.
With over 180 years...