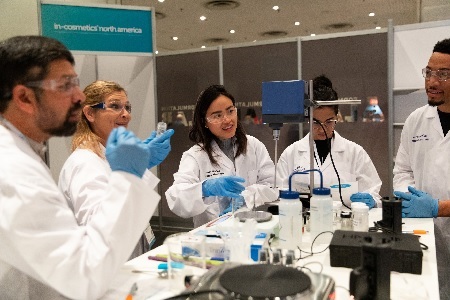 The personal care industry gathered at the in-cosmetics North America awards ceremony to honour excellence in R&D, product formulation and marketing. This year there were four award categories, with manufacturers, indie brand owners and suppliers coming together as one to celebrate the winners of the Innovation Zone Best Ingredient Award, Sensory Bar Award, Make-Up Bar Award and the Formulation Challenge.

Mibelle Biochemistry scoops Innovation Zone Best Ingredient Award
Leading supplier Mibelle Biochemistry was presented with the Innovation Zone Best Ingredient Award for its incredible Black BeeOme™. Obtained by fermenting the honey of a rare and old honey bee species, it wowed judges with its ability to regenerate the skin flora and restore the skin barrier.

Seppic takes home the Sensory Bar Award
Eight products were demonstrated in this year’s Sensory Bar, which is designed to highlight the most unique ingredients that excite the senses. Scooping the top prize this year was Seppic's Sunshine & Pixie Dust SPF30 – an easy-to-apply suncare emulsion. It is packed with shimmering glitter and brings SPF 30+ protection, while leaving skin soft, moisturized and gleaming.

Natura-tec presented with the Make-Up Bar Award
This award was presented to the supplier making the biggest strides forward in color cosmetics. The winner was Natura-tec's DIY Super Glow - a frosted metallic eye shadow that offers a soft, creamy texture. Its silky texture which glides easily into the eyelids was a clear favorite among the judges.

Swiss American the star of the show at the Formulation Challenge
The creative juices of some of the finest cosmetic chemists and marketers in North America were well and truly flowing in the Formulation Challenge yesterday. After receiving a box of mystery ingredients, teams from Shiseido, Colgate-Palmolive, Johnson & Johnson and Swiss American set about creating a unique new beauty product in just 45 minutes. In a new twist this year, participants were asked to formulate a serum for a specific target demographic.

After an intense battle, which went to the wire, Swiss American – the sole contract manufacturer in the contest – was crowned Formulation Challenge champion of 2019. Judges Sarah Jindal and Mark Chandler remarked that its Wise Beyond The Years serum for the face, neck and hands was perfect for its mature male target audience and scored highly in both the formulation excellence and marketing story. Runner up was Shiseido.

Lauren Kaye, marketing manager at Swiss American, said: “It was a great experience working as part of a team to create a product in such a short period of time. We are proud to have won, as we didn’t think that we would against such big brands. This will put us on the map!”

Daniel Zanetti, exhibition director at in-cosmetics North America, commented:“The innovation on display at this year’s event has been remarkable, with so many suppliers showcasing ingredients that will inspire those responsible for the creation of new beauty products. The winners of this year’s awards are truly leaders in this industry and we’re proud to recognize their achievements at the end of a busy and rewarding day.”

Five natural oils resonating with consumers in the new normal

A fine fragrance oasis in the heart of Paris