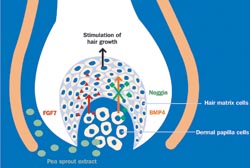 Plucked hair follicles before and after treatment with a scalp product were analysed for the expression of 30 genes important in hair physiology. An extract of pea sprouts was found to strongly upregulate the FGF7 and noggin genes, two important triggers for a new hair growth phase.

In an anti-hair loss study, phototrichograms confirmed the efficacy of the pea sprout extract to significantly increase the ratio of anagen to telogen hair and thus to improve hair growth.

The human hair follicle is a complex structure consisting of an outer root sheath, an inner root sheath, the hair shaft, the bulge and the sebaceous gland. The swollen, bottom part of the hair follicle is called the hair bulb. There, highly proliferative matrix keratinocytes produce the keratinised hair shaft. The ectodermal matrix encloses a zone of mesenchymal cells, called the dermal papilla. This well vascularised zone transfers nutrients to the hair bulb and plays an important role in the hair growth cycle. After hair follicles are generated in embryogenesis, the follicles undergo a cyclical growth. A hair growth cycle consists of three phases: anagen, catagen and telogen. Anagen is the growth phase that lasts about three to five years. Afterwards catagen, the involution phase, follows, lasting a couple of weeks. The cycle terminates with the telogen phase, a resting period of up to 4 months. Dermal papilla cells generate signals that regulate the activity of keratinocytes in the follicular matrix. These keratinocytes stop proliferation at the end of the anagen phase and undergo apoptosis in the catagen phase. The onset of a new growth phase and thus the length of the anagen phase are defined by the release of growth factors from dermal papilla cells. Adjacent, quiescent keratinocyte progenitor cells start to proliferate and to generate a new hair follicle. Hair follicles cycle independently leading to growing, resting and shedding hair at the same time. The density and total number of scalp hairs does not change. The proportion of telogen hair is normally 10% to 15%.1 Diffuse hair loss is characterised by a uniform reduction of hair density. Telogen effluvium is a diffuse hair loss during stress with premature development of catagen and telogen follicles and premature termination of anagen follicles. A trichogram analysis shows in this case a significant reduction in the anagen:telogen ratio leading to >25% of telogen hair. Triggers for diffuse hair loss include physiologic or emotional stress, a hormonal imbalance or nutritional deficiencies.

The study was conducted with 22 volunteers, half women and half men, aged between 46 and 61. Ten volunteers applied scalp products with extracts A and B and 12 volunteers products with extracts C and D. The extracts A, B, C and D were formulated at 2% into a neutral scalp product. The treatment with the products and the extraction of hair bulbs was performed on two test sites at the back of the head. The products were applied twice-a-day for two weeks. Before the first product application, 10 hairs were plucked from each test site and pooled together. At the end of the study, 20 hairs were plucked from each test site. The extracted hair bulbs were cut to about 1 cm length and stored at –80°C. The expression of selected markers was analysed using RT-qPCR method on mRNA extracted from the different hair pools. Analysis of gene expression was performed in duplicates (n=2) using a dedicated PCR array containing 32 target genes (including two housekeeping genes) selected for their importance in hair physiology. The PCRs were performed with the LightCycler system (Roche Molecular System Inc).

The study was conducted with 17 women and 3 men, aged between 21 and 37. The product, a gel containing 4% extract A, was applied on the scalp twice daily for 12 weeks. The selected subjects showed increased hair loss with 20% telogen hair for men and 15% telogen hair for women and with a hair density of at least 150 hairs/cm2. To perform the phototrichogram, an image acquisition was realised on D0, immediately after the shaving of a 1 cm2 scalp zone. Another image acquisition was realised on D2. Product application was started on D3. Another phototrichogram was performed at the end of the study.

A clinical trial was designed to study the effect of four different plant extracts on gene expression in hair follicles. The extracts A, B, C and D were formulated at 2% into a neutral scalp product and applied in the morning and evening over two weeks on 10 or 12 subjects. A pool of 20 follicles, plucked before and after treatment, was sufficient to extract enough RNA for a quantitative gene expression profile. Thirty genes important for hair physiology were followed. Besides a modulation of the expression of genes involved in hair pigmentation, the results showed mainly modulation of the expression of fibroblast growth factor 7 (FGF7) and of noggin (Fig. 1). The extract A, which is an extract of pea sprouts (AnaGain; INCI name: Pisum Sativum Sprout Extract, Phenoxyethanol, Sodium Benzoate, Aqua) was found to strongly activate both genes. The expression of FGF7 was increased by 56% and of noggin by 85% on average after two weeks’ treatment. FGF7 was stimulated in 8 and noggin in 7 out of the 10 volunteers. The expression products of the genes FGF7 and noggin, the FGF7 and noggin proteins, are well known signalling compounds, important for the induction of a new hair growth phase. Both proteins are mainly synthesised in dermal papilla cells. The plucked hair follicles used for the gene expression analysis contained the entire hair bulb enclosing the dermal papilla. So, the extracted RNA came not only from the matrix keratinocytes but also from the neighboring mesenchymal papilla cells. Figure 2 shows the roles of noggin and FGF7 in the hair follicle cycle. Noggin has an indirect function. It inhibits the activity of the bone morphogenetic protein 4 (BMP4) that has a suppressive role in telogen-anagen transition. Over-expression of noggin results in a shortened refractory phase.2 FGF7 is a dermal papilla signal that participates in instructing hair germ cells to proliferate and initiate the new hair cycle.3 The results of the gene expression profiles before and after treatment indicates a stimulatory effect of the pea sprout extract on hair growth.

A pea sprout extract, formulated at 4% into a gel base, was tested on twenty, mainly female subjects. The test product was applied on a defined scalp zone, twice a day, over three months. Before and after treatment a phototrichogram was performed to analyse hair growth. To perform a phototrichogram, a defined scalp zone is shaved and then photographed. The number of small dots corresponds to total hair follicles. Two days later, the shaved zone is photographed again in order to verify the amount of hair follicles in the growing phase (anagen hair). As shown in Figure 3, treatment of the scalp with the pea sprout extract clearly reduced the density of telogen hair (–28.3%) and increased the density of anagen hair (+7.9%). Consequently, the hair growth coefficient which is defined as the ratio of anagen to telogen hair, increased from 4 to 7.2 (Fig. 4). The slightly enhanced hair loss at the beginning of the study (about 20% telogen hair) of the subjects could be normalised by a three month treatment with the pea sprout extract (about 12% telogen hair at the end of the study). At the end of the study, the volunteers were asked to evaluate the efficacy of the treatment in a questionnaire. 95% of the volunteers noticed a slight to strong reduction in hair loss and a slight to strong improvement of the general hair condition (Fig. 5). 85% of the volunteers noticed a regrowth of their hair.

Pea sprouts as a rich source of secondary metabolites

Many health benefits are attributed to pulses, including peas. Pulses belong to the family of fabaceae and are thus rich in isoflavones, a class of polyphenolic secondary plant metabolites. Secondary metabolites are plant compounds that are not required for the primary metabolic processes like growth and reproduction. The role of secondary metabolites in plants is to protect them from disease, damage, pathogens, drought, salinity, extreme ultraviolet and pollutants. Many of these phytochemicals are known to exert beneficial effects on human health or to play an active role in the amelioration of disease. Isoflavones for example are known to act as phytoestrogens or to exert antioxidant activity. Sprouts are the young shoots that develop from germinating seeds. Because the shoots of a plant are especially vulnerable, secondary metabolites are very abundant at this stage. Sprouts that are a few days old have the highest concentration of healthy nutrients per calorie of any food. The high concentration of isoflavones in the pea sprouts might be responsible for the positive effect on hair growth.

Acme-Hardesty has served as one of the personal care industry’s leading distributors of bio-based products and specialty ingredients, driving performance and growth for over 75 years. Our committed personal care staff has contributed significantly to the rapid expansion of our product portfolio while assisting our customers in developing...