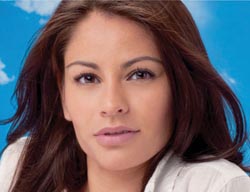 Skin luminosity is an important attribute for giving skin its youthful glow. Luminosity is partially determined by the skin chromophores collagen and bilirubin. Bilirubin, a breakdown product of blood and heme, is one cause of dark circles around the eye. Until recently, it was unknown that plants produced bilirubin.

To date, a small group of plants are known to produce bilirubin and hence contain a mechanism to control production and degradation of the compound. An extract of Strelitzia, a plant that produces bilirubin, was found to degrade solutions of bilirubin. A human in vivo assay ascertained that topical applications of the plant extract, named Vivillume, decreased dark circles and improved luminosity of the skin. The extract was also found to increase collagen III levels, which are known to decrease with ageing and hence negatively impact luminosity.

Clear, even skin tone is the mark of flawless beauty. In time however, natural ageing, environmental factors and lifestyle leave their mark on skin in the form of uneven skin pigmentation, dull, lacklustre complexion and dark under-eye circles, among other skin imperfections. Across cultures, luminous, even toned skin is considered a beauty ideal (Fig. 1). It is well known that in the western world, there is a continuous quest for healthy sun-kissed skin. On the other hand, Asian cultures value paleness. While these two ideals may appear contradictory, both cultures will define beautiful skin as being uniform, even-toned and luminous. The appearance of skin is determined by how much light is reflected back to the eyes (Figs. 2 & 3). Skin luminosity is maximised by even colour and fine texture on the skin surface. There are three key chromophores that influence skin luminosity: melanin, collagen and haemoglobin.1

In young skin, melanin is evenly distributed with limited melanocyte activity. As skin ages, continued UV exposure leads to melanocyte damage causing them to be permanently ‘switched on’. This leads to the over-production of melanin. The result is local discoloration which may eventually manifest itself in the form of uneven pigmentation and age spots.

Apart from its role in ensuring structural firmness in skin, collagen is also responsible for the brightness of skin colour.1 It acts as a mirror, scattering light back towards the skin surface. As skin ages, exposure to factors such as free radicals and UV light show a detrimental effect on the level and quality of collagen. The decreased and damaged collagen is less effective at reflecting light back, resulting in a dull, less luminous complexion.1

Haemoglobin has the role of delivering oxygen to skin. De-oxygenation of haemoglobin can produce blue-toned skin coloration. When carrying oxygen in the blood, haemoglobin has a red hue which gives skin a healthy glow associated with young skin. Repeated exposure to UV light can cause blood vessels to be dilated or leaky. Ageing skin will typically have higher levels of haemoglobin due to the increase in the number of dilated blood vessels. Further, the distribution of haemoglobin becomes more uneven with ageing. These irregularities are reflected in the form of uneven skin tone and blotchiness on the skin. When haemoglobin breaks down, part of it is converted into the chemical bilirubin. Inefficient expulsion of bilirubin leads to its build up in the skin, causing it to turn yellow and sallow.

Bilirubin is commonly found in most animals because their blood contains haemoglobin. Plants do not require haemoglobin for their cellular respiration and hence, in general, do not contain bilirubin. However, in 2008, a group of researchers discovered that some plants belonging to the Strelitziaceae family produce human equivalent bilirubin.2 These plants are commonly known as ‘bird of paradise’ and grow worldwide in the tropics. The bird of paradise flower is often used in exotic flower arrangements as the flower resembles a bird with the white or orange petals forming the bird’s ‘head’ and the spathe (a modified leaf that forms a sheath to initially enclose the flower petals) forms the bird’s ‘beak’ (Fig. 4). In nature, sunbirds perch on the sturdy spathe, causing it to open and release pollen onto the bird’s feet, which is then deposited onto the next flower the bird visits. Although most people are familiar with the orange bird of paradise, Strelitzia reginae, there are other members in the family, such as the white bird of paradise, Strelitzia nicolai, which grows over 30 feet tall and produces stately white flowers similarly shaped to S. reginae. The arils of the white bird of paradise seeds give the appearance of them having an orange head of hair (Fig. 5). It is in these arils that plant bilirubin was first discovered. It is currently unknown why the plant produces bilirubin in its arils. Although the biochemical pathway that the plant uses to produce bilirubin has not yet been elucidated, we postulated that because the plant would contain the mechanism to produce bilirubin, it too might have a pathway or mechanism to degrade bilirubin to ensure the proper concentration of bilirubin within its tissue. If an extract from the plant could degrade bilirubin in situ, this could lead to an application for potentially improving the appearance of human skin with a high level of bilirubin, often seen as dark under eye circles.

The most abundant protein produced by mammals is collagen, and it is found throughout the epidermis. In fact, 70%- 80% of the skin’s dry weight is collagen. There are many types of collagen, but type I and III are the two most prevalent types, composing 90% to nearly 100% of the collagen found in the skin.3 In young, healthy skin, the ratio of type III to I is maintained in a fixed proportion. However, as the skin ages, collagen III levels decrease at twice the rate of collagen type I, leading to a skewed ratio of type III to I, impacting luminosity and skin elasticity.4 In an attempt to revive the luminosity of older, less radiant skin, there is a desire to increase the levels of the chromophore collagen type III so that the ratio of type III to I is as found in younger skin. An in vitro study was performed to ascertain the impact that the Strelitzia nicolai extract had on collagen type III levels. Along with a positive control of sodium ascorbate, the S. nicolai extract was tested at three concentrations: 0.5%, 1% and 2%. All three concentrations were found to significantly upregulate collagen III levels, potentially helping to create more luminous skin.

The efficacy of the Strelitzia nicolai extract was evaluated via a 60 day in vivo study. The study examined the ingredient’s effect on skin tone and radiance, improvement in appearance of under-eye circles and improvement in appearance of under-eye puffiness by professional clinical evaluation. In addition to photographs of the panellists being taken in standard visible light, three other lighting modalities were used to show different aspects of the skin in more detail. The three other types of light were cross-polarised, parallel polarised and Woods lamp/UV fluorescence. Cross-polarised light utilises a light source with a perpendicular polariser over the lamp. This light filters out surface reflections for improved visualisation of the subsurface detail such as under-eye dark circles and pigmentation. Parallel-polarised light is produced with a parallel polariser over the lamp. This light allows a high degree of surface reflections from the skin for better visualisation of the skin’s topography, including wrinkles, fine lines and texture. The Woods lamp allows for visualisation of porphyrins and age spots, some of which are not yet visible to the unaided eye, but as an individual ages, some of these spots will become visible in standard light. Clinical photographs of the panellists showed a compelling improvement in skin luminosity, along with a decrease in appearance of under eye puffiness and a decrease in appearance of dark under eye circles (Fig. 9). In addition to professional clinical evaluation of the subject’s skin, the subjects were asked to complete a subjective questionnaire at the end of the study which asked them to rate improvement for 12 areas related to the skin, from the eye area, to aspects influencing luminosity to general skin appearance. Panellists who used the product containing the Strelitzia nicolai extract noted an improvement in all 12 areas (Figs. 10-12). Clinical photographs demonstrate improvements in appearance of under-eye dark circles, appearance of under-eye puffiness and improvements in skin luminosity (Figs. 13-18).

As we age, skin’s luminosity and uniformity of tone tend to degenerate. Vivillume is a plant-based active that restores skin’s beauty to reveal a recharged, youthful, luminous appearance. It has demonstrated its ability to degrade bilirubin in situ. When applied topically, it has been effective at reducing the appearance of multiple signs of ageing, leading to a more luminous, youthful complexion. Vivillume is a skin revitaliser that improves skin tone to yield an illuminated complexion.

Making a difference for essential workers

KLK OLEO is a global oleochemical producer, offering an array of high quality, innovative and sustainable products and solutions. We are the manufacturing division of our parent company, Kuala Lumpur Kepong Berhad, a leading international plantations group listed on the Main Market of Bursa Malaysia Securities Berhad, with a market capitalisation...