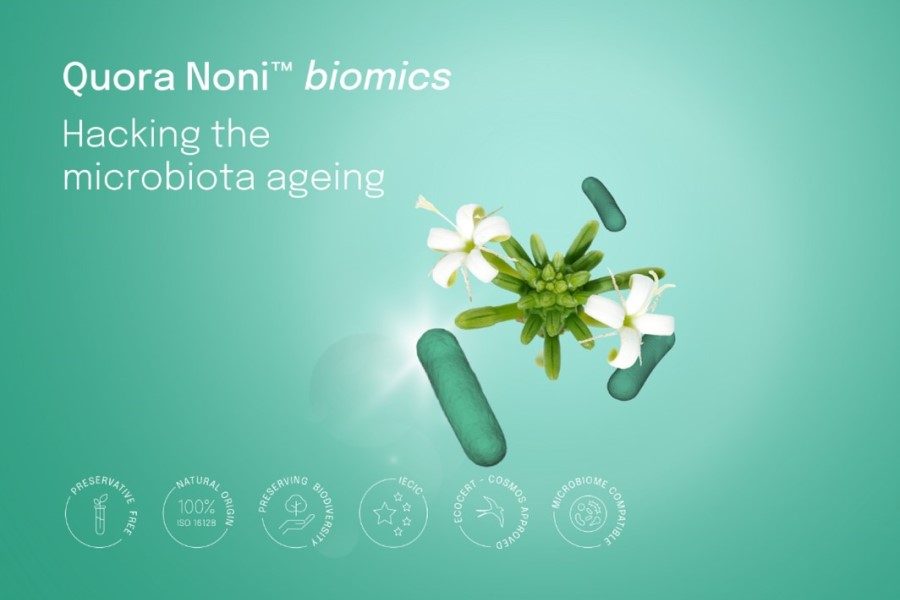 The Barcelona firm says in vitro and clinical assays on young and mature skins represent scientific advances in the microbiome field.

The Quora Noni Biomics active ingredient transfers properties of a plant (Morinda citrifolia, also called Noni) to skin, reducing the signs of cutaneous ageing produced by the ageing of the skin microbiota.

Unveiled at the Cosmetorium trade show in Barcelona, Vytrus presented a novel concept for the first time in cosmetics – reversing the microbiota ageing to improve the signs of ageing on the skin through a 100% natural active based on plant biotechnology.

Vytrus has studied the role of the microbiota on skin ageing and how our microbial population changes and ages with the passage of time, negatively affecting our skin’s appearance.

“Our skin bacteria communicate through a system called Quorum Sensing that generates coordinated behaviours that can turn our bacteria virulent,” the company said in a statement.

“When that happens, there is a microbial imbalance that leads to the generation of molecules that can damage our skin – the so-called Senile Biome Markers (pro-ageing markers),” it added.

“This mechanism (Quorum Quenching) rejuvenates the skin by rejuvenating the skin microbiota,” it added.

Established in 1925, Croda is the name behind high performance ingredients and technologies: creating, making and selling speciality chemicals that are relied on by industries and consumers everywhere.
They have a network of over 4,200 passionate and committed employees, working together as one global team across manufacturing sites and...

Founded in 1964, Sederma became a member of the Croda International Group in 1997. Sederma is dedicated to the development of active ingredients and in the creation of innovative concepts for Cosmetics, based on the mastery of biotechnology, fine chemistry and vegetal extraction.Located near Paris, all Sederma activities, from R&D and manufacturing...