Effects of Chlorella extract on skin 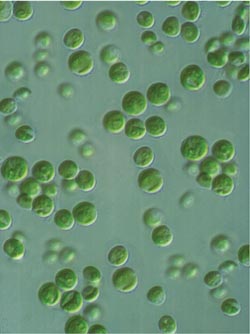 Pierre-Yves Morvan and Romuald Vallee – Codif International, France The ageing process starts from the age of 20 when our cells produce fewer proteins. Skin ageing is characterised in three ways: * By a decrease in the thickness, firmness and elasticity of skin promoting wrinkles. * By the unsightly effect of skin microcirculation in the form of spider veins on the legs or dark circles on the face around the eyes. * By a reduction in the antioxidant capacities with, in particular, lower protection against UV.

It allowed studying the effect of Chlorella vulgaris on human epidermal keratinocytes Thioredoxin 1 expression. A complementary study was done on the protein TX2 by Western blot. A complementary in vitro test was carried out in order to measure, by immunofluorescence, the protection of Langerhans cells into a skin treated by UV irradiations.

The Chlorella extract was obtained by alkaline hydrolysis of Chlorella vulgaris. It was filtered on hollow fibres and concentrated by nanofiltration, and thus an extract purified out of salt and enriched out of proteins and peptides was obtained.

Human fibroblasts or keratinocytes, isolated from normal human skin and cultivated in monolayer, were treated over 24 hours with Chlorella vulgaris (without preservative) tested at 1%. At the end of the experiments, cells were recovered and RNA was prepared for genomic analysis. The gene expression of these fibroblasts or keratinocytes was analysed by a transcriptomic screening on mini-chips. The analysis is based on the use of total RNA as a template for reverse transcription and 33P label (optimal sensitivity). Labelled cDNA targets were hybridised to the specific cDNA probes conveniently fixed to the mini-chips. After extensive washing, the relative amount of each specific target hybridised to its probe was revealed by phosphor imaging. The results for TIMPs and proteins of the epidermal differentiation complex were confirmed using real-time PCR (quantitative PCR, Q-PCR). This confirmation was performed with RNA extracted and stored at -80°C. G3PDH was used as the housekeeping gene. The result for elastin was confirmed by a test on cells. The production of elastin by human dermal fibroblasts, treated by Chlorella vulgaris at 0.5% over 24 hours, was quantified by the Fastin Elastin Assay kit.

Two experiments were conducted: the first with normal human dermal fibroblasts (NHDF), cultured in co-culture on the lower face of the membrane of 27 human reconstituted epidermis (Skinethic), 13 days old. The product Chlorella vulgaris (without preservative) tested at 1% was introduced in the culture medium and deposited on the surface of epidermis over 24 hours. The second experiment used normal human epidermal keratinocytes (NHEK), cultured in monolayer. Cells were cultivated over 24 hours at 37°C and 5% CO2. At the end of the experiments, cells were recovered and RNA was prepared for genomic analysis. The gene expression of these cells was analysed by a transcriptomic screening on mini-chips.

Consumer expectation has never been higher in this exciting category. Consumers want personal care products that are not only good for them but the environment too – with no compromises. We can help you innovate towards your future goals of simple and clear labels as well as more culturally comprehensive products in compact or waterless formats...