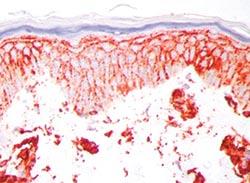 In order to counteract the appearance of signs of ageing, like skin dryness, wrinkles, loss of tissue, sagging, one can use invasive procedures like injections of dermal fillers. Collagen injections used to be very popular during the 2000s but, mainly because of the origin of the collagen used, they have been replaced by hyaluronic acid injectables. They have quickly been gaining in popularity.

In this article we will look more in detail about why this molecule is so interesting in the fight against signs of ageing and how to positively act on it without any invasive procedures.

The origin of hyaluronic acid

First discovered in the vitreous humour of the eye in 1934 and subsequently synthesised in vitro in 1964,1 hyaluronic acid (or hyaluronate or hyaluronan) is a negatively charged, high molecular weight (up to 107 daltons) glycosaminoglycan found predominantly in the extracellular matrix. Glycosaminoglycans (or proteoglycans or GAGs) are a key component of the various layers of the skin. GAGs are complex polyanionic polysaccharides located on the surface of cells and in the cellular matrix. HA is the simplest of the glycosaminoglycans, the only one not covalently linked to core protein, and is unbranched and composed of repeating alternating units of glucuronic acid and N-acetylglucosamine. Thus, it is highly hygroscopic: hydrated hyaluronic acid can contain up to 1000-fold more water than its own weight.

An essential role in the body Hyaluronic acid was known for its regulatory activities with respect to epidermal proliferation and for its ability to retain water.3 Despite the simplicity of its composition, a great number of other biological functions have been discovered. It not only functions as a biological glue that participates in lubricating joints or holding together gel-like connective tissues, but also functions as a micro environmental signal that co-regulates cell behaviour during embryonic development and morphogenesis, wound healing, repair and regeneration.4

It has been discovered that hyaluronic acid and its fragments constitute messengers for various signal transduction pathways within the cells. In this process, various receptors are engaged. Indeed, hyaluronic acid has several known receptors: CD44, RHAMM, TLR4 and 2, Lyve-1, HARE, etc. CD44 (Cluster of Differentiation 44) is identified as the principal hyaluronan receptor.5

CD44 is a cell surface glycoprotein implicated in a variety of cellular functions including adhesion to hyaluronan and collagen. It recognises a six sugar sequence of hyaluronan. Anchored to the cells through CD44, hyaluronic acid is stabilised and creates a moisturised and lubricated environment in the extracellular matrix. This ensures optimal visco-elastic properties, moisturisation and nutrient supply. In addition, CD44 receptor plays an important role in hyaluronic acid turnover regulation.6,7

Hyaluronic acid is a ubiquitous component found in the whole body (50% in the skin). There are 15 g of hyaluronic acid in a 70 kg individual, of which 5 g is replaced daily. Due to a rapid degradation – half-life of less than a day8,9 – the hyaluronic acid pool is naturally and constantly renewed but the pace of renewal decreases with age and external aggressions.10,11 It is thus necessary to act very early and sustain an optimal hyaluronic acid turnover, similar to young skin, to delay the signs of ageing. Indeed, the stimulation of hyaluronic acid synthesis in the epidermis promotes the installation of a veritable ‘water sphere’ around keratinocytes, ensuring the diffusion of nutrients into the epidermis. A further advantage resides in the constitution of a water network protecting against the continual compressions to which the skin is exposed. Lastly, stimulation of elastin synthesis enables the skin to maintain flexibility and elasticity.

Optim Hyal™ is an active substance developed by Sederma that restores the optimal level of hyaluronic acid by stimulating hyaluronic acid neosynthesis and by sustaining its renewal. It also supports elastin synthesis to help the skin better withstand the stresses to which it is subjected (results not shown here but available on demand). It is composed of oligosaccharides with a mean sequence length of 18 ± 6 glucuronic acid molecules with a mean degree of acetylation of 9 ± 1% (see Fig. 3). Their average molecular weight is 3.6 kDa.

An identified mechanism of action

These Glycokines (now referred to as ‘the signalling oligosaccharide’) have been demonstrated to stimulate the cell receptor CD44, and the hyaluronan synthase HAS-2 expression leading to an efficient cutaneous water network and an optimal self-renewal of hyaluronic acid.

A topical corticosteroid (0.05% betamethasone) was applied to experimentally induce ageing. Post-corticosteroid treatment, half of the skin samples received three topical applications of the equivalent of 1.5% signalling oligosaccharide-based active ingredient at three-day intervals. The other half was used as the experimentally induced ageing control. A further series was not subjected to impairment and used as the untreated control.

Synthesis maintenance was evaluated by immunohistological analysis of the CD44 receptor at the epidermal level using histological scores (from 0 to 4) of the intensity of labelling as per the method published by Branchet et al. (1990).12 The score 4 indicated intense labelling of the epidermis (Fig. 4, red). As expected, after 4 days, the CD44 intensity of the aged skin was markedly less than that of the untreated control (–28%; p<0.01). In contrast, aged skin exposed to the studied signalling oligosaccharide maintained CD44 density (+55%; p<0.02) at a level close to that of the untreated control (+11%, nsd).

HAS-2 expression, as well as HA synthesis, was evaluated using normal human fibroblasts that received the studied signalling oligosaccharide in an appropriate culture medium. The results were then compared to the control.

The stimulation of HAS-2 synthesis by the studied signalling oligosaccharide is clearly demonstrated (+90.5%, p<0.01), as well as the increased in HA synthesis which reached almost the same level as the positive control.

HA synthesis by keratinocytes was also evaluated. Human keratinocyte monolayers were exposed to the signalling oligosaccharide, equivalent to 1%, 3% and 5% of the formulated active ingredient for three days (37˚C plus 5% CO2). After exposure, the culture supernatants were assayed to determine the quantity of hyaluronic acid by an ELISA method (n=3).

The positive control, 1 mM retinoic acid, exerted the expected stimulant effect on hyaluronic acid synthesis. The stimulation of hyaluronic acid synthesis by the studied signalling oligosaccharide-based ingredient was thus demonstrated and shown to be clearly dose-dependent. Stimulation reached +40% (p<0.01) relative to the control with the equivalent of 3% and +85% (p<0.01) for the equivalent of 5%.

Two clinical studies were conducted to measure the visible effect of this signalling oligosaccharide-based active ingredient. The first one was a 2-month single-blind study on a panel of 26 female subjects (mean age: 37.7±4.9 years) with early signs of ageing. The creams, placebo or containing 3% of the formulated signalling oligosaccharide, were applied under the usual conditions of use twice daily by the volunteers. Different parameters were measured: skin moisturisation, suppleness and smoothness.

Superficial moisturisation was measured using a Corneometer while in-depth hydration was determined thanks to a MoistureMeter. The measurements made after one month are summarised in the Figure 5 (results after 2 months available upon request).

The results obtained clearly showed that the use of the studied active ingredient enabled maintenance and amplification of dermal and epidermal moisturisation.

Finally the Silflo negative impression method was applied to the subjects’ crow’s feet to evaluate improvements in skin relief. Many parameters were measured among them being wrinkle density which decreased by 46% up to 96% (p<0.01). But a picture is worth a thousand words as illustrated in Figure 6.

The second clinical study was a selfevaluation performed by 104 female subjects with, in the majority of cases, dry or wrinkled skin. The volunteers applied a 3% signalling oligosaccharide cream for 3 weeks and gave their opinion after the applications.

The subjects’ responses showed a very positive perception of the effect of the tested signalling oligosaccharide.

Caribbean Natural Products Inc. (CNP) is a distributor of raw materials for personal care and cosmetic products. It is a minority owned and operated company, founded by Loren Miller.

Mr. Miller served as President of Caribbean Aloe Vera, Inc. from 1998 to 2006. With a strong knowledge of the cosmetic industry and the relationships...