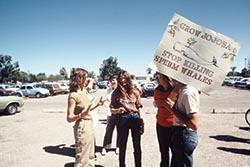 During the 1970s the plight of sperm whales was brought to international attention through a worldwide anti-whaling campaign. Several centuries of intensive hunting of these gentle mammals brought them to the brink of extinction. Sperm whales were specifically targeted for their spermaceti oil, an excellent lubricant for personal care and industrial applications.

At the height of the ‘Save the Whales’ movement a plant derived wax ester from jojoba was identified as an excellent alternative to sperm whale oil. Interest at federal level gave greater visibility to both this environmental movement and the jojoba plant chemistry that led to the beginning and rise of the jojoba industry. It was recognised that: “[t]he fact that jojoba oil so closely resembles the precious fluids of great free-swimming marine mammals is an elegant proof of the interrelatedness of all life. [That] the jojoba [plant] is a gift from the land to the sea, […] a gift of life for the whales and for the people.”1

Sperm oil is primarily composed of wax esters similar to those found in jojoba oil (Table 1). Differences in processing of the sperm oil source, the spermaceti and the blubber, result in some fractions containing variable levels of triglyceride esters. It is important to remember this fact when comparing published data on physical properties of both sperm oil and jojoba oil.

NAGASE Personal Care, a division of NAGASE & CO., LTD., is an established supplier of beauty and personal care ingredients from Japan together with our overseas offices. We provide a wide range of specialty, basic and naturally derived ingredients to researchers, formulators, and marketers in the Personal Care industry.
With over 180 years...

Elementis is a global specialty chemicals company driven by scientific innovation to deliver ingredients that enhance the performance and value of our customers' products.  A world renowned expert in rheology technology, Elementis is also the global leader in antiperspirant actives.  Elementis' portfolio of green products includes natural clay...