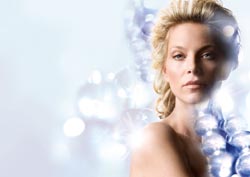 Skin is a highly complex tissue acting as a protector against physical, chemical and biological attack. It plays a crucial role in the protection against dehydration and the control of body temperature.1

This barricade is provided by the ‘horny layer’ (stratum corneum [SC]), representing the outermost layer of the epidermis. The horny layer is a thin inert, water-retaining barrier which both regulates the moisture content of the skin and protects it against external influences. Due to its structure it is often compared to a brick wall in which the non-viable corneocytes are embedded like bricks in a matrix of lipids (‘mortar’).2 The lipid mixture of the mortar is assembled into densely packed lamellar structures mainly consisting of ceramides, cholesterol and fatty acids. On a weight basis, these lipids constitute approximately 47% ceramides, 24% cholesterol, 11% free fatty acids and 18% cholesterol esters.3 The proper physical organisation of the lipid bilayer structure is crucial for an effective skin barrier and this is provided by a lipid lamellar assembly in a tightly packed orthorhombic configuration. The lipid environment of the stratum corneum is an essential factor for maintaining the skin’s equilibrium. As a result of age, health or environmental conditions, both the amount of lipids and in the lipid composition change, leading to a weakening of the barrier function.4–6 Ceramides, as the major epidermal lipid components, are valuable components of skin care products, since the topical application of ceramide-containing products can replenish low levels of stratum corneum lipids.

Changes in the SC lipid composition have been linked directly to barrier function impairments such as dry and rough skin showing an increased transepidermal water loss (TEWL) and augmented penetration of harmful compounds from the environment finally resulting in inflammation. Furthermore, during ageing the functions of the skin underlie severe changes in both structure and chemistry. For instance, the amount of ceramides present in the SC decreases drastically with age7 because keratinocytes have a reduced ability to synthesise certain classes of ceramides; especially phytosphingosine-based ceramides like Ceramide NP (formerly Ceramide 3).8–10 Additionally, in certain skin diseases accompanied by elevated water loss rates such as atopic dermatitis, psoriasis and ichthyosis, abnormal intercellular membrane structures for barrier function are observed pointing out the importance of a correctly packed lipid matrix.5,6 With three optically active carbon atoms on the phytosphingosine, there are theoretically eight different structures of the final molecule possible. In human skin, only one is present – the same one offered by Evonik Personal Care. Conversely, chemical syntheses yield a mixture of all eight variants. Thus a balanced application of SCidentical lipids such as pure ceramides or a combination thereof with cholesterol and free fatty acids may be able to correct any defects in the SC lipids organisation. A sphingolipid platform that yields efficient molecules for the treatment of skin and/or skin diseases exists at Evonik Personal Care and also enables scientists to investigate the specific properties of the individual substances in skin barrier function.5,6,11 The production technology of Evonik Industries combines the biotechnological production of the sphingoid base, phytosphingosine, that possesses the exact chemical configuration found in skin with a final chemical coupling to a fatty acid (Fig. 1). During production the phytosphingosine precursor tetra acetyl phytosphingosine (TAPS) is obtained by yeast fermentation with the strain Pichia ciferii followed by a deacetylation to get the free sphingoid base with the naturally occuring (2S, 3S, 4R) configuration. A subsequent acylation of the sphingoid base with fatty acids of varying chain lengths finally leads to ceramides with the skin-identical configuration, e.g. Ceramide NP as shown in Figure 2. Lipids in vivo appear to exist as a balance between a solid crystalline state (orthorhombic packing) and gel (hexagonal packing) or liquid crystalline states. The former represents the most tightly packed conformation with optimal barrier properties, however a greater proportion of hexagonally packed lipid conformations are known to occur in the outer layers of the SC, presumably to facilitate desquamation. Ceramides and cholesterol are capable of forming the hexagonal phase but the formation of the orthorhombic phase also requires the presence of long chain fatty acids. Detailed research on the assembly of SC lipids has been performed by Bouwstra et al., in conclusion establishing the so-called ‘Sandwich model’.12 By electron microscopy and x-ray diffraction the SC lipids are observed as alternating broad/narrow/broad sequences of bilayers representing two broad lipid layers with crystalline structure separated by a narrow central lipid layer with fluid domain. X-ray diffraction analysis demonstrates that the adjacent crystalline sublattices are based on long saturated hydrocarbon chains of ceramides. Both lamellar phases incorporated in the sandwich model, the long periodicity phase (LPP) of 12 nm-13 nm, and the short periodicity phase (SPP) of 5 nm-6 nm, are crucial for the permeability barrier of the skin. Based on SC lipid structure studies with mixtures of isolated SC lipids, Bouwstra et al proved the importance of the singular lipids, especially the ceramides.13 The need for the right ceramide stereochemistry is exemplified by more recent studies. Ceramide NP (N-stearoyl phytosphingosine). Figure 2, now referred to as ‘the phytosphingosine-based ceramide’) offered by Evonik Personal Care is a human skinidentical ceramide that supports the protective layer of the skin. Due to its naturally occurring three-dimensional structure of the phytosphingosine backbone, the phytosphingosine-based ceramide is completely integrated into mixtures of human lipids as shown in Figure 3b. In contrast, the exchange of Ceramide NS by a chemically synthesised racemic sphinganine-based Ceramide 2 (N-stearoyl sphinganine) to the human SC lipids leads to a disruption of the lipid matrix resulting in a completely different x-ray diffraction (Fig. 3c). These findings were further supported by in vitro experiments in which cultured human primary keratinocytes were incubated with 25 M the phytosphingosinebased ceramide, 25 M of the racemic Ceramide 2 or without any additions. In the presence of the racemic Ceramide 2, the cells showed significantly enlarged flattened morphology which is a sign of senescence. This induced ageing-process can be explained by observed incompatibility of non skin-identical ceramides with subcellular structures. The cells that were incubated with the phytosphingosine-based ceramide showed normal behaviour. Considering the latest understanding of dry skin, a correction of the generally lowered ceramide levels, particularly of the phytosphingosine-based ceramides, is needed.14 The efficacy of the skin-identical ceramides such as the phytosphingosinebased ceramide distributed by Evonik Industries has been approved by several short term and long term in vivo studies, with a significant efficacy in reducing the transepidermal water loss (TEWL) and skin irritation.

Efficacy as a crucial component of the SC’s lipid barrier

The outermost layer of the skin – and hence of the body – is represented by the horny layer (stratum corneum) consisting of corneocytes and lipids. The lipid layer is assembled in a densely packed multilamellar structure. These lipids constitute ceramides, cholesterol, esters thereof and free fatty acids. The physical assembly of the stratum corneum is crucial for an effective skin barrier and therefore to maintain the skin’s equilibrium. As a result of age or health, changes in the lipid composition occur, leading to a weakening of the barrier function. Lots of efforts in skin research pointed to the fact that ceramides, as the major epidermal lipid component, are key players in maintaining the epidermal integrity and health. These findings lead to the concept that ceramides are high-performance active ingredients for skin care products, since their topical application can replenish low levels of stratum corneum lipids. Especially the skin-identical Ceramide NP (formerly Ceramide 3) described in detail in the present article, shows complete biocompatibility with the supramolecular biophysical structures of the naturally occurring mixture of human skin lipids. In contrast to this, a chemically synthesised non skin-identical ceramide, based on racemic sphinganine, leads to a disassembly of the lipid barrier matrix and senescence (biological ageing) when applied to cultured keratinocytes. Therefore skin-identical stereochemistry of ceramides is the key to maximum activity of this molecule class. This article summarises formerly obtained results showing the superior efficacy of Ceramide NP on restoring the skin barrier and completes these findings with performed studies on concomitant improvement in skin hydration and smoothness. After an application period of 14 days the moisture content in the epidermis increased effectively in vivo. Additionally, the skin smoothing properties of Ceramide NP, i.e. reduction of fine lines and improvement of the macro structure of the skin, has been proven. These findings once again prove the integration of Ceramide NP into the skin’s own lipid lamellar system finally contributing to an improved barrier function and skin performance.

Why OLVEA?
“We are continually investing for the quality of our products, the satisfaction of our customers and our commitment to sustainable development. While maintaining our family identity, we aim at developing our people and creating a safe environment.
OLVEA offers oils from sources you can trust.”
Arnauld Daudruy, President –...